In the automotive sector, we can find different segments:

Manufacturers of equipment and components for the automotive industry

In a first level are the vehicle manufacturers, also known as OEMs (for its acronym in English: Original Equipment Manufacturer) and manufacturers of parts, equipment and components for the automotive industry (or auxiliary automotive industry). The latter is classified into two types according to the segment to which its products are destined (SERNAUTO, 2014):

In Spain, the automotive sector according to the Annual Report 2017 of ANFAC (Spanish Association of Manufacturers of Automobiles and Trucks) contributed to GDP in 2017 by 8.6% and represented 17.9% of the country's exports, with nine vehicle manufacturers installed in the country, three of these companies have four assembly factories in the Castilla y León region: 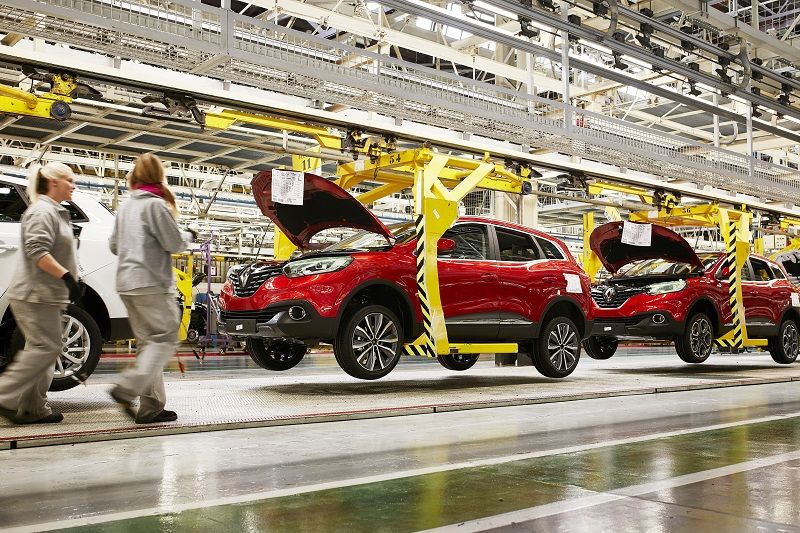 These companies located in our region have other assembly or vehicle manufacturing plants in the country: the RENAULT - NISSAN - MITSUBISHI alliance has a NISSAN vehicle factory in Barcelona (where it manufactures its NISSAN NV 200 van in an electric and combustion model) traditional) and IVECO has another factory in Madrid where it manufactures the STRALIS truck in its version of natural gas combustion engine (CNG: Compressed Natural Gas and LNG: Liquefied Natural Gas).

Alternative energy vehicles (AEV's) begin to have a market share. In Castilla y León, only the electric RENAULT TWIZY electric quadricycle is manufactured in this type of vehicle at the Valladolid factory. The RENAULT Group markets vehicles from three different brands: Renault, Dacia and Renault Samsung Motors. Of these three, DACIA is the brand that sells vehicles both in the traditional combustion engine version and in gasoline bi-fuel - LPG or autogas. IVECO manufactures its model of natural gas truck in Madrid and NISSAN in Barcelona its model of electric van.

RENAULT also owns an an engine factory in Valladolid.

The RENAULT - NISSAN - MITSUBISHI alliance has other component factories in the country besides this RENAULT engine plant in Valladolid: NISSAN manufactures components in Cantabria (Los Corrales de Buelna) and a RENAULT plant manufactures gearboxes in Seville.

The NISSAN factory in Ávila will become, starting in September 2019, when the production of the truck models that are assembled ceases, in a production plant for spare parts that will have a high volume of spare part manufacturing. for the different models of the Renault and Nissan brands in Europe.

The automotive sector generates a large amount of employment. According to ANFAC in 2017, the sector represented 9% of the active population in our country, generally with a high degree of quality and stability.

In the year 2017, Castilla y León is positioned as the first autonomous community producing vehicles with 20.36% of the total annual production, according to data from ANFAC.

Interestingly, mention that the automotive sector is the first investor in R & D in Europe ahead of sectors such as pharmaceutical or biotechnology.

The main business association of this sector, ANFAC, is chaired since January 2018 by José Vicente de los Mozos current Chairman of the Board of Directors of RENAULT ESPAÑA and related to our region since although he was born in Brazil, he spent his childhood in Valladolid. José Vicente de los Mozos mentions, from the presidency of ANFAC, aspects that may be interesting for the future development of the sector in Castilla y León (Annual Report 2017 of ANFAC):

In the current framework of awarding new investments in the future, and with the moment of technological disruption faced by the automotive sector, the change towards new production models must be supported, stimulating productive investments in Spanish plants. Especially in the field of industrial processes and technological training for the adaptation of factories to the vehicles of the future.

The Spanish automotive industry needs an efficient innovation policy as an essential lever to maintain and enhance our competitiveness and productivity. […]

The increase in the quota of alternative vehicles is essential to reduce the so-called greenhouse effect and improve the air quality of our cities. And we must not forget that in our country alternative vehicles are manufactured: electric, natural gas and LPG. From small utilities to large industrial vehicles, passing through light commercial vehicles.

Regarding the sector of automotive components in Castilla y León, as an example of the importance of this automotive auxiliary industry, you can take the percentage of components supplied in the Kadjar of RENAULT manufactured in its factory in Palencia (Núñez M. , 2015): [...] 81% of the volume of Kadjar pieces come from these [suppliers located in the Iberian Peninsula], of which more than 60% are in Castilla y León.

According to CCOO State Industry, in its study The sector of manufacture of equipment and components for automotive in Spain of May 2016, is estimated according to the DIRCE (Central Directory of Companies) of the INE that in Castilla y León in the sector of components of automotive industry there are a total of 57 companies that employ 14,190 people, representing 10% of industrial employment in Castilla y León and 9.2% of total Spanish employment in the automotive components sector. In this same document it is stated that the production of the components sector, based on data from the INE in Castilla y León, exceeded € 4,300 million, which represents 12% of all state production.

The sector of automotive components in Castilla y León in this period, presents greater stability than the whole of the Spanish sector, probably as a result of the four automotive factories in the region (RENAULT Palencia, RENAULT Valladolid, IVECO and NISSAN), in addition to a very fluid interlocution of all the agents involved in the sector, articulated through a specific industrial table, called the Industrial Observatory of the Automotive Sector [Automotive Sector Working Group], which despite the budget cuts, has continued to operate from its creation (CCOO State Industry, 2016).

BUSINESS ASSOCIATIONS RELATED TO THE SECTOR

In the following sectoral business associations you can find more information about the automotive sector at regional and national level.

Production of vehicles, registrations, fleet and other data of the automotive sector in Spain through ANFAC:

Contribution of the sector of equipment and components for the automotive sector to the Spanish economy by SERNAUTO (other reports and statistics only for associates): http://sernauto.es/es/inicio

Indicators of the automobile sector on trends of the professional market of corporate mobility through the CVO - The observatory of the company vehicle: https://www.arval.es/sobre-arval/cvo 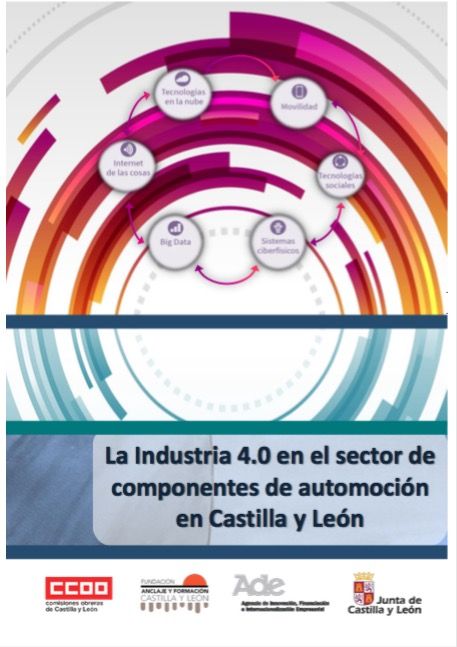 The Industry 4.0 in the sector of automotive components of Castilla y León

The set of innovative technologies that are framed with the Industry 4.0 label together with digitalization are presented as the future of industrial production means and will be integrated into the automotive industry to reach the "Factories of the future". In this study we present what these technologies of Industry 4.0 are, how they can be integrated into companies and how they will affect the industrial sector of the car throughout its value chain. 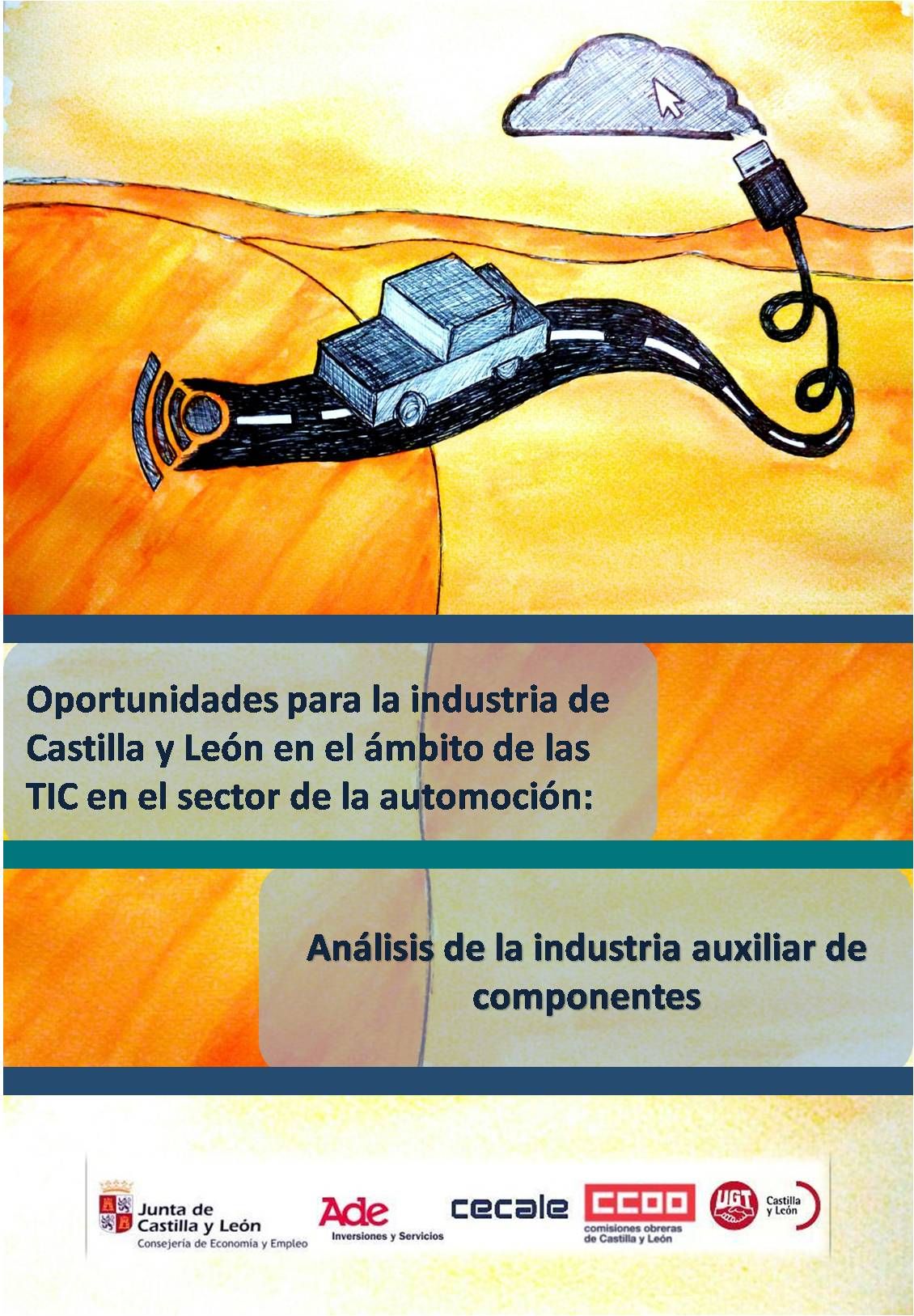 Information and Communication Technologies (ICT) have reached the automobile and the automotive industry. Thus the car has become a connected vehicle with connectivity, intelligent and automated to become autonomous. In this report we study this evolution fostered by ICTs in the automobile as well as the integration of ICTs in manufacturing and management processes and the training needs to tackle this future challenge.

One of the biggest concerns for the automotive sector in Castilla y León, and in general throughout the country, is that R & D is imported, without enhancing any line of research or development in our own territory. The use of existing infrastructure and the development of the elements that can enhance this activity, would help to ensure the future of companies and the generation of employment and added value to regional activity. Throughout this document, the current R & D situation is reviewed and what measures would be appropriate to retain and increase it. 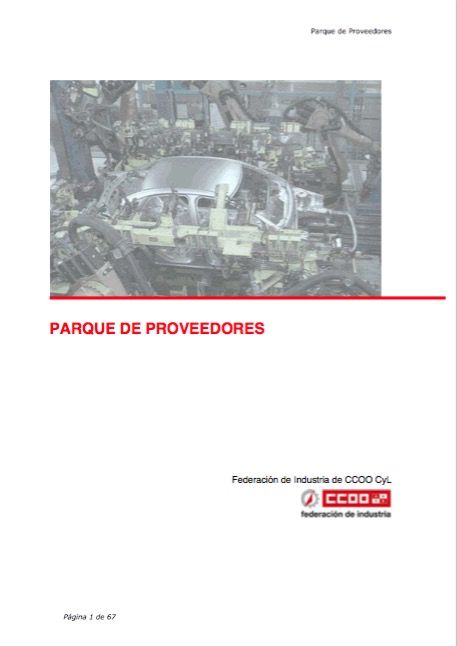 The automotive sector is an essential sector for the economy of our region being a great driver of economic growth and employment, which is currently facing a complex economic scenario, in which demand has been reduced and an economic situation is faced difficult. Within this context throughout the study is considered one of the main elements of competitiveness in the activity: the importance of suppliers, their role within the value chain, and on the other hand, both the current situation of the suppliers of this sector in Castilla y León, as the possibility of articulating a supplier park as a competitive advantage in our community. 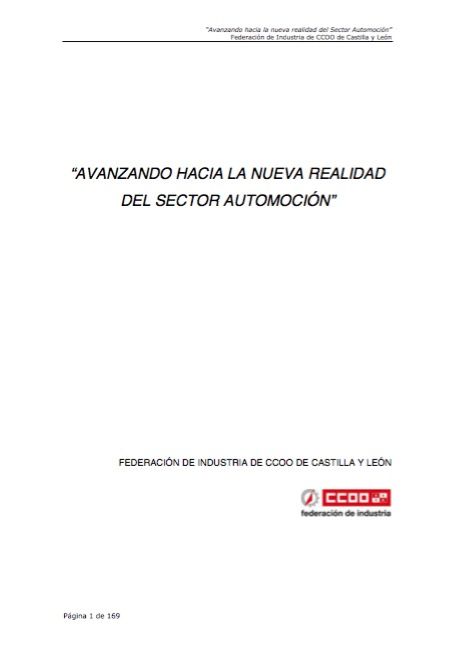 Advancing towards the new reality of the Automotive Sector

Analysis of some of the trends and challenges facing the automotive sector and its impact from the point of view of employment, training and also the economy, as well as some of the possible solutions, such as promotion of activity, sustainability trends in manufacturing and production, etc. 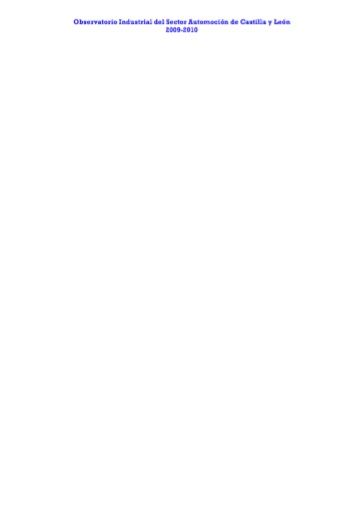 Within these reports is the study on the Training Center of Excellence of the Automotive Sector of Castilla y León, a report on the qualification and employment in this sector of activity, and the development of a GIS map of business activities in the automotive sector. 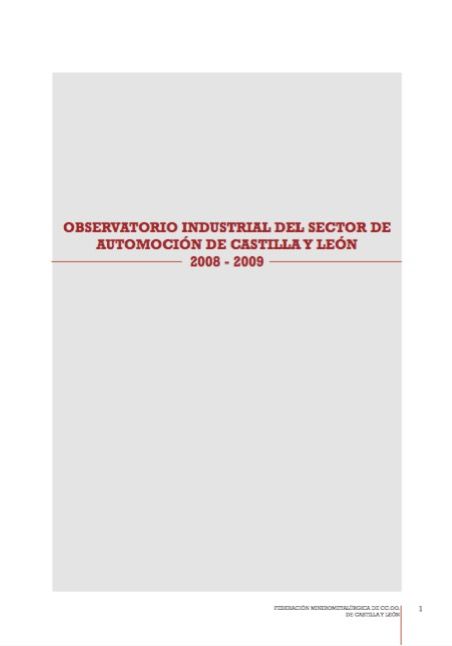 Through this study, the aim is to obtain the most accurate possible maps of the inflows and outflows in the autonomous community, in order to achieve greater efficiency and optimization of the logistics flows of the Castilla y León industry, not only from the point of view of view of the automotive industry, but also of the rest of the sectors, based on a better use of the synergies of the products and / or services of the different sectors, achieving a reduction of the logistic costs. 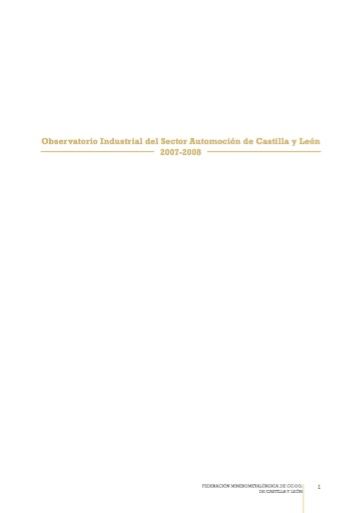 The automotive sector is an industrial sector both in economic terms, as well as employment and first class production in Castilla y León. Throughout this study we analyze the environment and working conditions of workers who carry out their activity in companies in this sector in our autonomous community, with special attention to the perspective of equality. 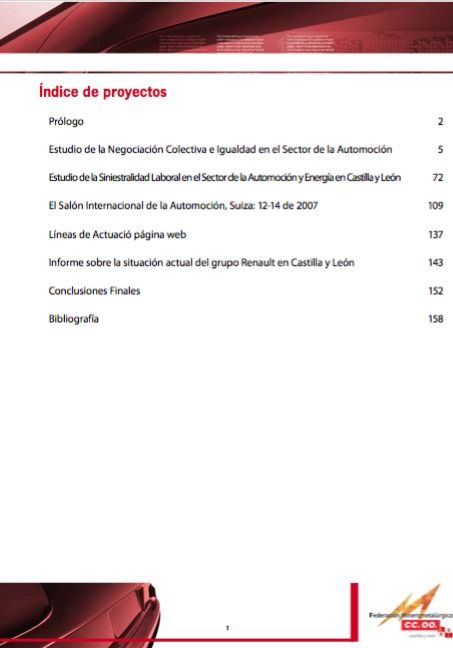 Study of Collective Bargaining and Equality in the Automotive Sector